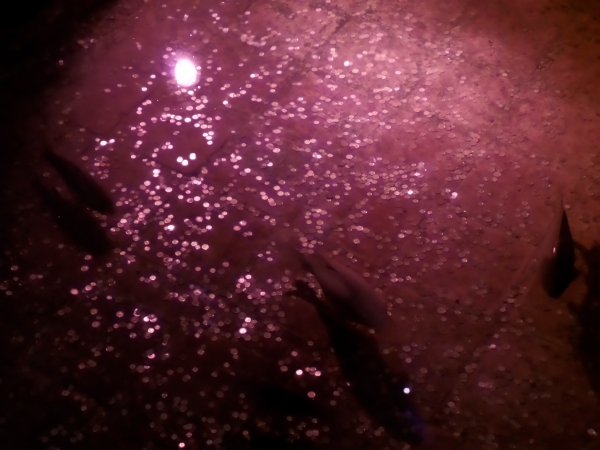 We agitate. We take. Our creativity is

We strike the bluebell

carry its freight within ourselves.

The glade in which we tilt is loud,

but it grows quieter. We can detect bombs among the snowdrops

who are not sad and white but turbulent with purple, back-lit.

We are bombs ourselves. Not quite quorate. En masse.

One hyper-creature among the wood sage,

It isn’t that I can’t be singular.

I am also private, intimate with

I hum, singing with my whole body in the keys of A and C.

A citizen. Member of the wax pavilion. Mostly feminine.

The others convey their narratives in books of pheromone.

They have been time-travelling in fragrances

We are a quorum of cartographers who navigate through dance.

We’ve found the absences where maps are scent-less.

We see you on our thousand screens

We are congregating, still collecting

We are an alternative to love.

We have been, and we will be, dissolution.

Jonah and the River Dolphin

I’m in here, under the rafters of vertebrae,
my head cushioned by her oesophagus,
breathing her muskiness. This isn’t what I meant

by peering into the creek, to see beyond the silt:
this species we haven’t glimpsed for a decade.
I can’t imagine how she ended up in Essex.

Canny headed with a fleshy, bread knife beak,
she smiled at me while water slipped over her eyes.
Somehow in I spilled, as if down a waterslide.

Perhaps I shouldn’t have touched.
Her skin, from the outside, is like a peeled boiled egg.
From inside it has the give of the soft palate.

how wind animates the spinnakers of yachts,
and as she moves my voice grows tenuous,
pitched as if from a ventriloquist.

Nobody knows where I am, my only companion
is a hapless jellyfish, separated from his bloom:
a wraith in a circle of bioluminescence.

These last words quiver in the rubbery chamber.
In response, her body throbs and murmurs.
I fear for myself, counting the people

I forgive on my viscous fingers,
listening to my many modulations
before she swallows me deeper.

At first you brushed them off as though your skin
had picked them up from cardigans or ageing
cloth, from running your hands along the cat.
But then you realised if you rubbed your arms,
your abdomen, your thighs, you would release
a clutch of fibres, tangled blue and red,
threading up through the surface of your flesh.
As iron filings drawn to the air, they will not stop
their creep, their puckering white scars.
Incessant itch with no location you can scratch
because it exists between you and the world:
a place the scientists will not believe
seeing only mouse hair and house dust
spooling into mysteries at your touch.

A lighthouse lens floating in mercury,
and its view: the moon on the sea.

The zip in the back of my dress, catching
the shadows as it slides down.

My key, searching for the touch of the lock
in the strobing porch light.

A scrape of fish scales, iridescent
on the edge of a knife blade.

Swerving in the road to avoid the puddles,
the rain beading on my bicycle.

How bins roll in the wind at six am,
spilling their bright secrets:

the balled wrapper of a KitKat shared,
or foil rubbed with roasting fat.

And here, a spoon with a portrait
scooped inside: inverted, wide eyed.

The needle and thread that sealed the flesh.
Names carved into the skin of a birch.

That magpie’s shining eye, watching
as I trowel the foxgloves in.

Twenty pence, pushed into the slot
to animate the fortune teller’s face.

Solder blobbed onto the circuit board.
Wire trembling in the telephone.

The tinsel drifting ‘round the Christmas tree.
On the beach, the lining of a spiral shell.

This ring I wear.
The scissors that sliced the envelope.

A mirror swallowing my image.
What I sold you for.

(please ask permission to reproduce any of these poems)